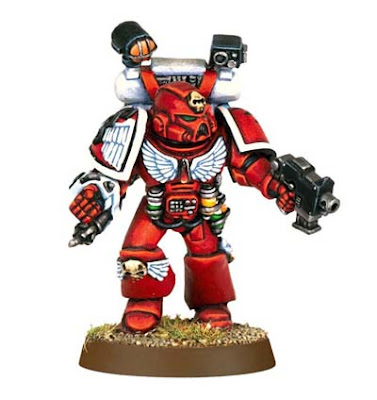 With the Codex apparently making these guys valuable, more and more are finding their way into Blood Angel lists. Trouble is, you don't want all of them looking the same. Here's my attempt at making three different versions. The Apothecary above from GW is not a bad model actually. If you only need one in your army.

In this case though, I have a Client who needs three of them and he doesn't want all of them looking exactly the same. Can't say that I blame him either. I wouldn't want three of the same thing running around either. I guess these guys are that good in a Blood Angels list that having three of them makes the difference. 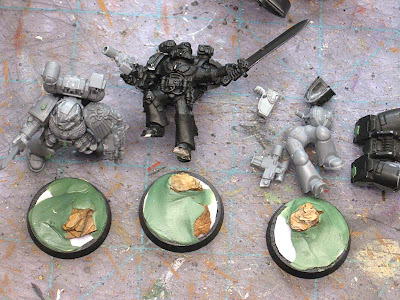 So it's my job to come up with three variations of this guy. And... keep it simple and cost effective. So we decided to use one "stock" model and convert the other two. Oh, and one of them will have a magnetized jump pack for good measure.

The basing will be a Baal planet dust type theme in warm colors to compliment the reds on the models. You can see in the pic above the idea is to create a little bit of variety to an otherwise barren landscape by adding some small pieces of bark to the bases and then building up around them with greenstuff in a way that sand might be blown against the smaller rocks. 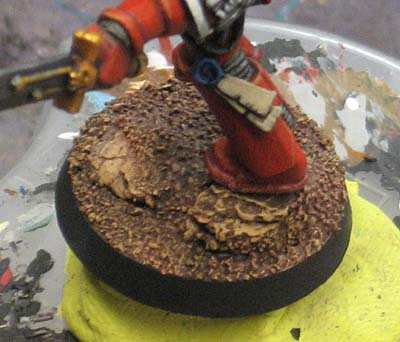 And here's the finished base. Looking at it now, I realize the picture doesn't show just how "red" the sand is. Here it looks more brown. It's a version of my new basing method but I only used the fine sand on the tops of these. I didn't want any variation in the sand itself, but wanted it's overall shape and the few rocks on the base to be the variety.

And for those wondering, the white stuff you see on the unfinished bases is paper that has been glued down to cover up the slot in the middle of the base before putting the greenstuff down.

These guys will give me a chance to really push my red painting skills too. I've got a good formula for painting red and I'm dying to give it a go on some more Blood Angles. I enjoyed painting the few Space Hulk sets that I've done before so much that red quickly went from a hated color to one of my favorites to paint.

I've got one completely done at this point. I have the second one built and the third one is still waiting on one last bit to arrive.

With all three of them done now, here they are.