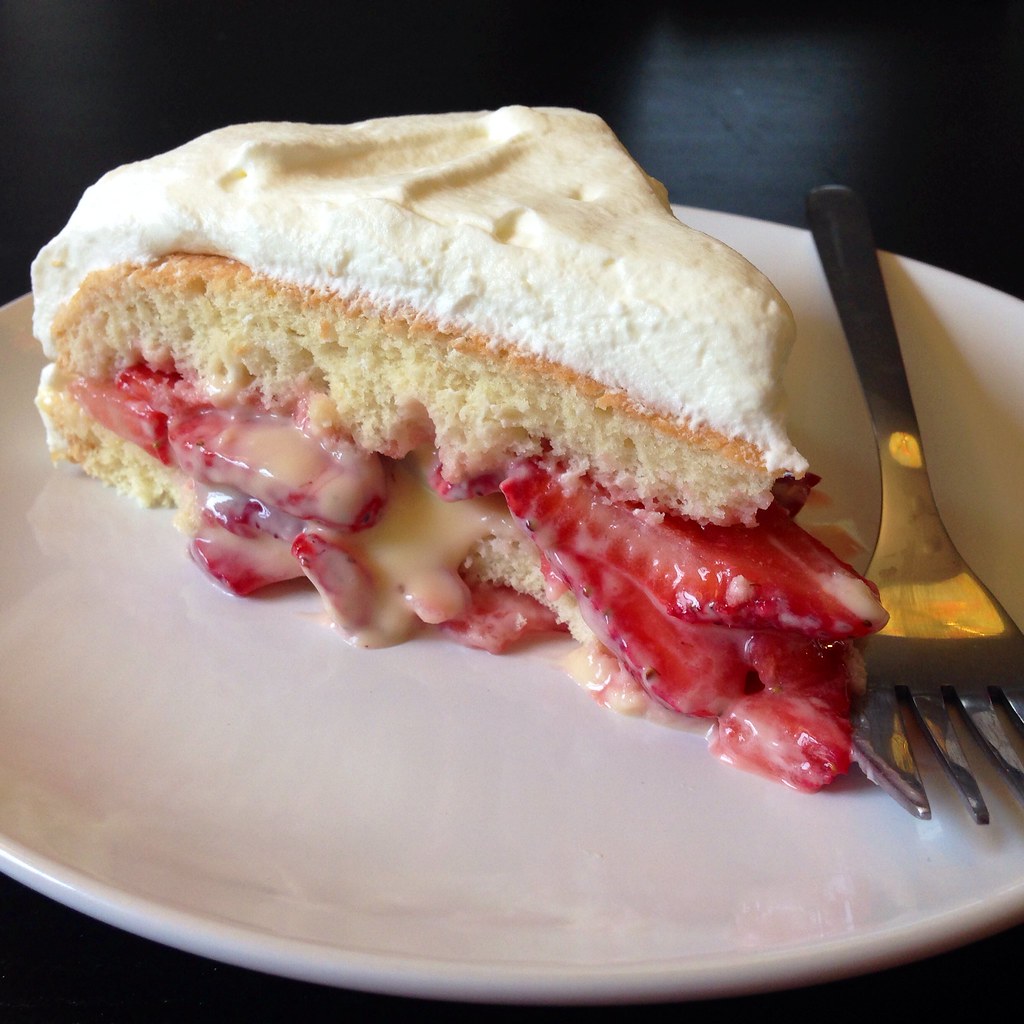 Growing up in Cleveland, I knew this as "the really yummy cake with the fresh strawberries."  I was aware it had a name, but because I had only heard people say it and never saw it in writing, I always thought it was a "cascada" cake.  It was only after leaving Cleveland that I realized you can't get this cake everywhere, which is so, so sad for everyone else in the world. 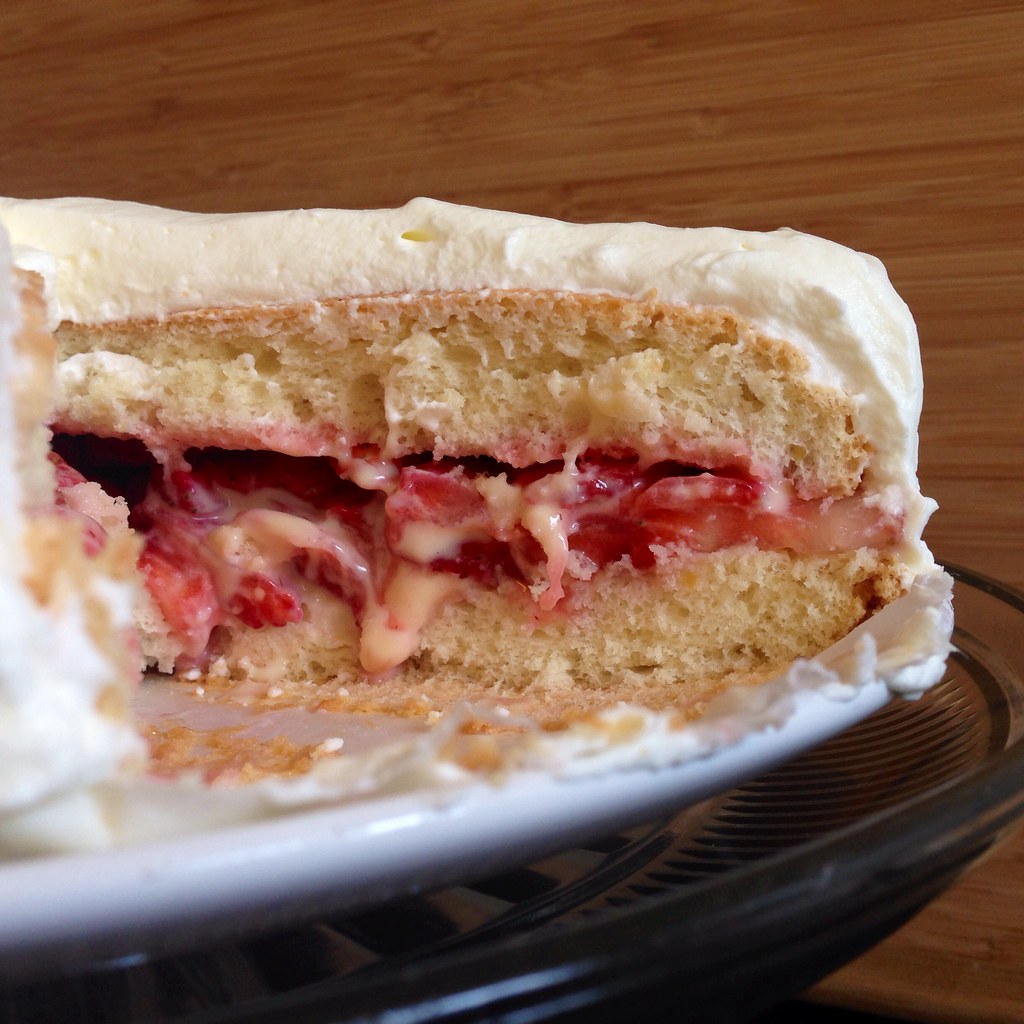 Think of it as the strawberry shortcake of your dreams:  layers of light, moist chiffon filled with fresh strawberries and custard and frosted with whipped cream.  For me, it's the fresh strawberries that really make this cake; they're tossed with just a couple spoonfuls of sugar to release their juices but still stay firm and almost have a little crackle because of the seeds. 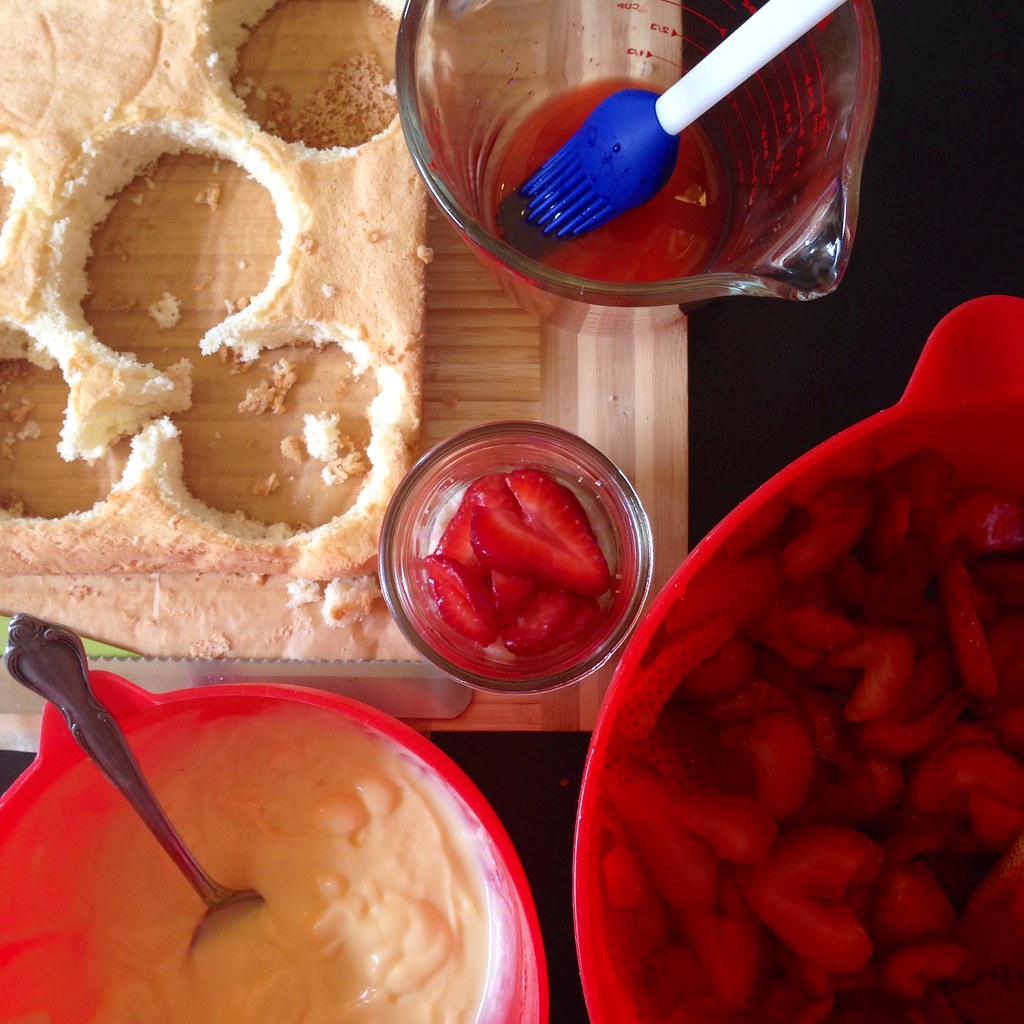 I pretty much followed this recipe from Sweet Amandine, except I decided to only make a two-layer cake with half the recipe and try to make three-layer cakes-in-a-jar with the other half (similar to my Happiness Cake in a Jar).  For the two-layer cake, I chose to put the strawberries on top of the custard only because I figured it would be easier spreading the strawberries over the custard than the other way around.  Since you're not really spreading around the fillings for the cakes-in-a-jar, and it actually looks nicer for the custard to be seeping into the strawberry layer, I flip flopped it for the jar version.  I also decided to use vanilla sugar in the custard since I like the subtle additional flavoring and confectioner's sugar in the whipped cream. 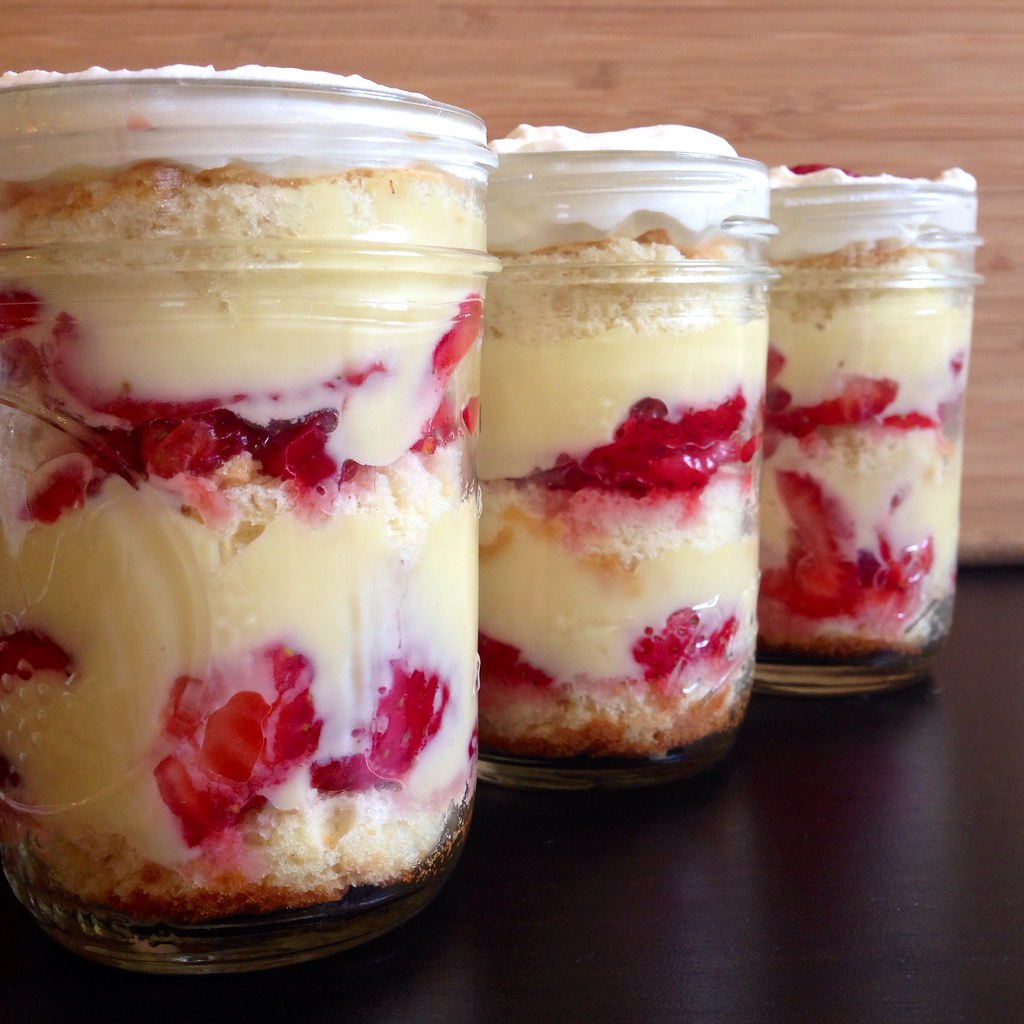 For the custard:
6 large egg yolks
1/2 cup vanilla sugar (or regular sugar if you don't have vanilla sugar)
2 cups half and half
3 tablespoons cornstarch 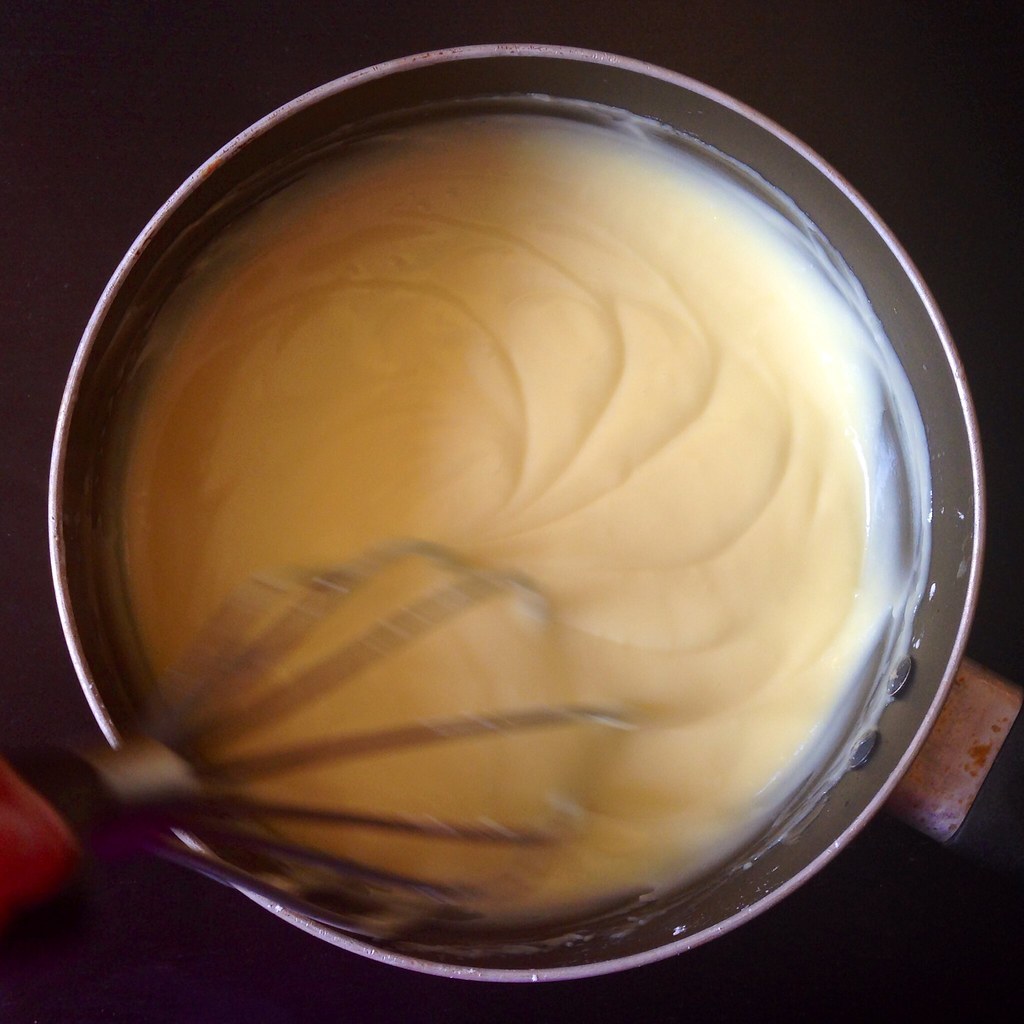 Whisk together all of the custard ingredients in a saucepan.  Heat over medium-low heat, whisking constantly until thickened.  Turn down the heat if it starts to simmer.  Transfer the custard to a bowl, cover with plastic wrap, and cool to room temperature.  Transfer to the refrigerator and chill for at least 3 hours, or up to 2 days.

Preheat the oven to 325°F. Line the bottoms of two 9" round cake pans with lightly oiled parchment paper.  Sift or whisk together the flour, 1 1/4 cup sugar, baking powder, and salt in a large mixing bowl. 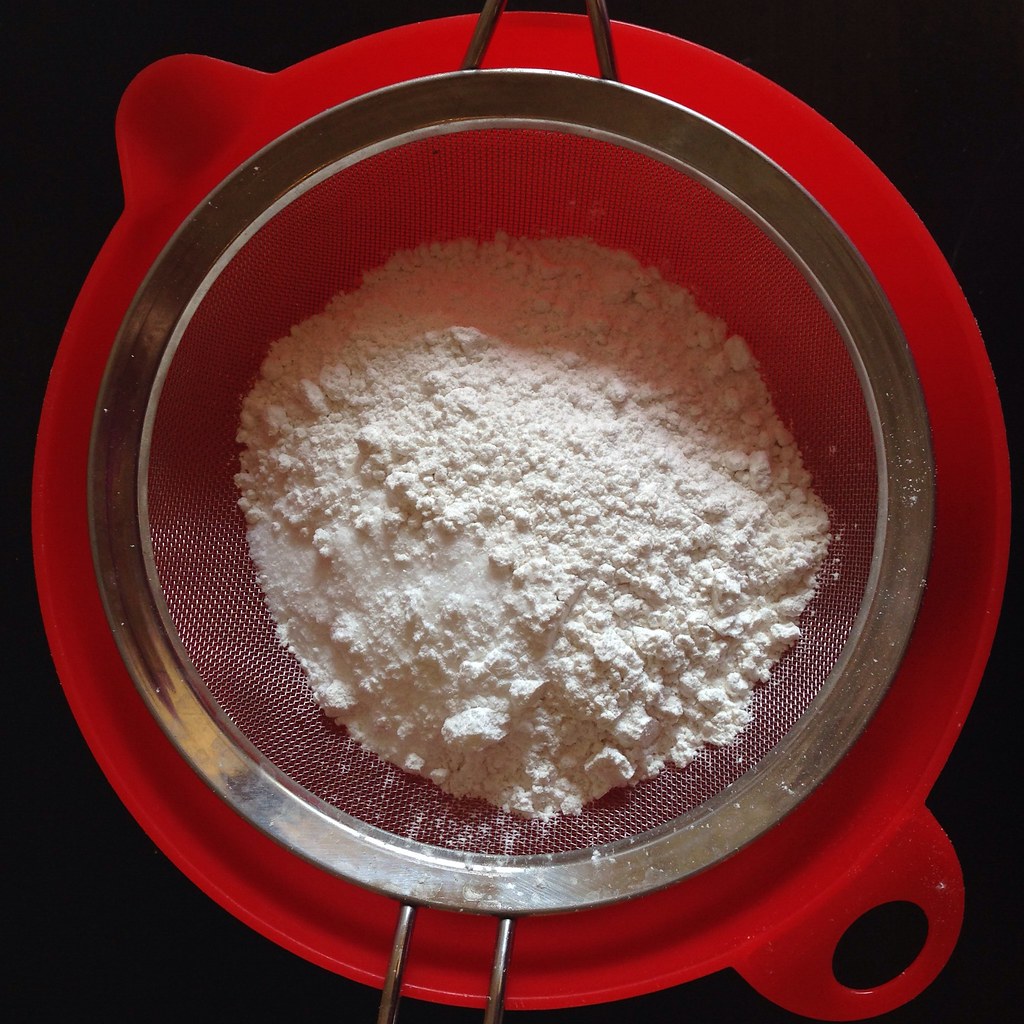 In a separate bowl, beat together the yolks, water, oil, lemon zest, and vanilla until smooth. Stir into the flour mixture. In another large bowl beat the egg whites with the cream of tartar until soft peaks form. Add the remaining 1/4 cup sugar and beat on high until the peaks are stiff but not dry. 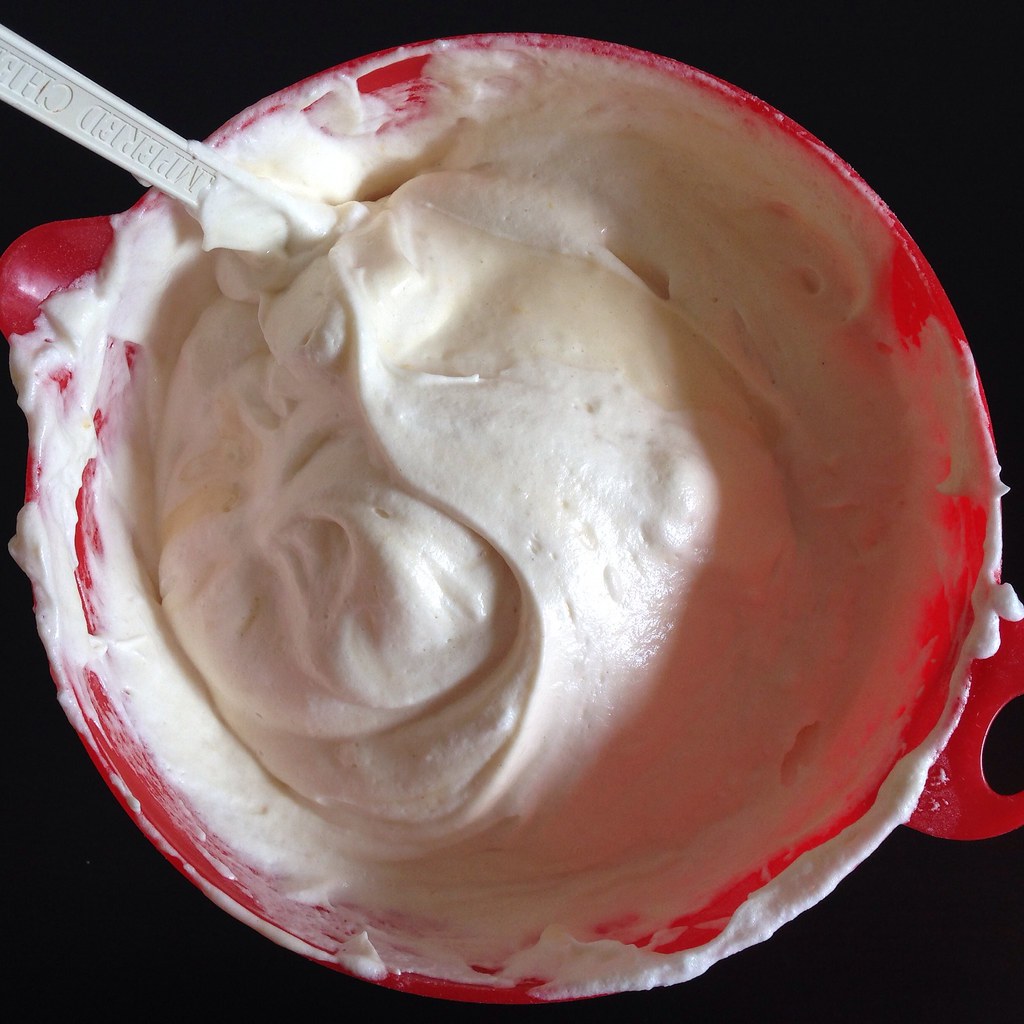 Using a rubber spatula, fold about a quarter of the fluffy egg whites into the egg yolk mixture. Then very gently fold in the remaining whites. As soon as the egg whites are no longer visible, stop folding. Scrape the batter into the prepared cake pans and spread evenly. Bake for approximately 35 minutes or until the top springs back when lightly pressed and a toothpick inserted into the center comes out clean. 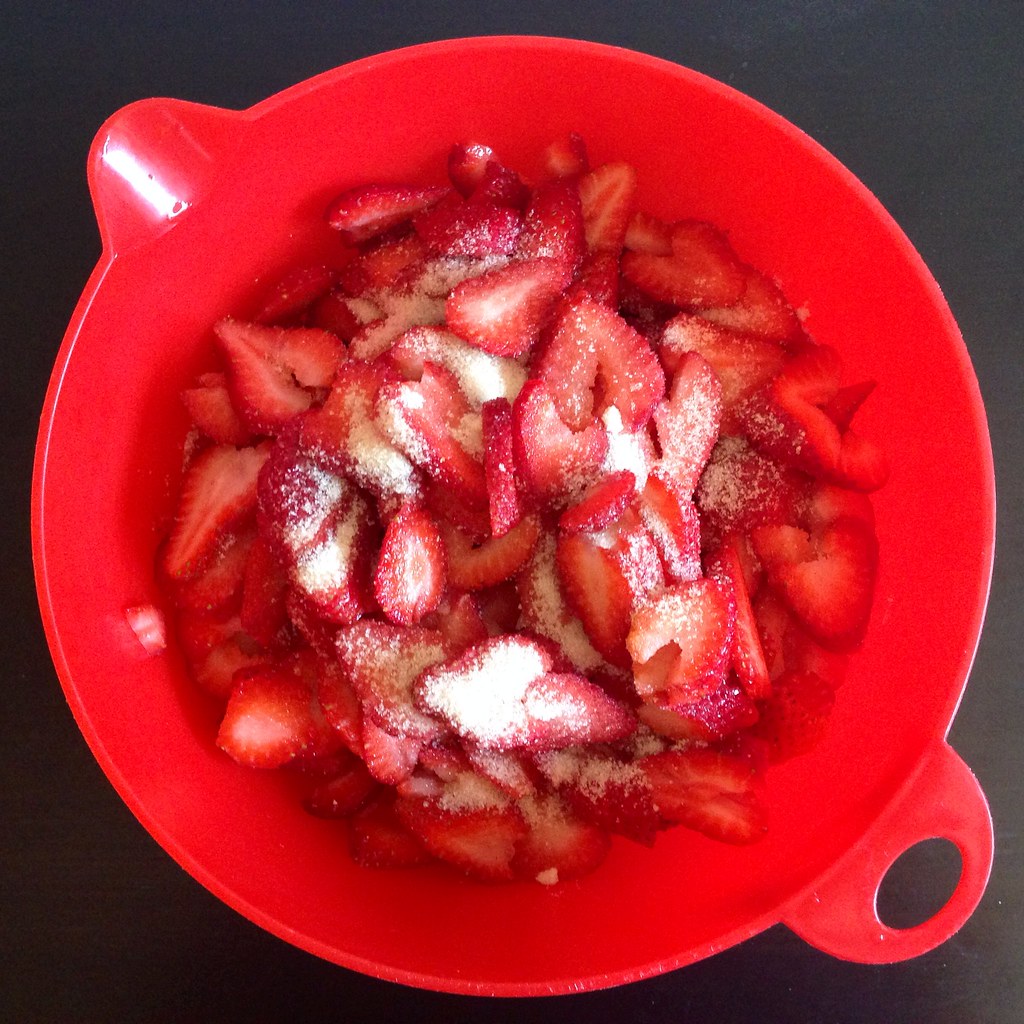 In the meantime, hull and slice the strawberries thinly, reserving a few to garnish the top of the cake with.  Sprinkle with the sugar and stir. Allow the strawberries to macerate for 1 hour, giving them a stir every so often. Strain the berries, reserving the released juices. 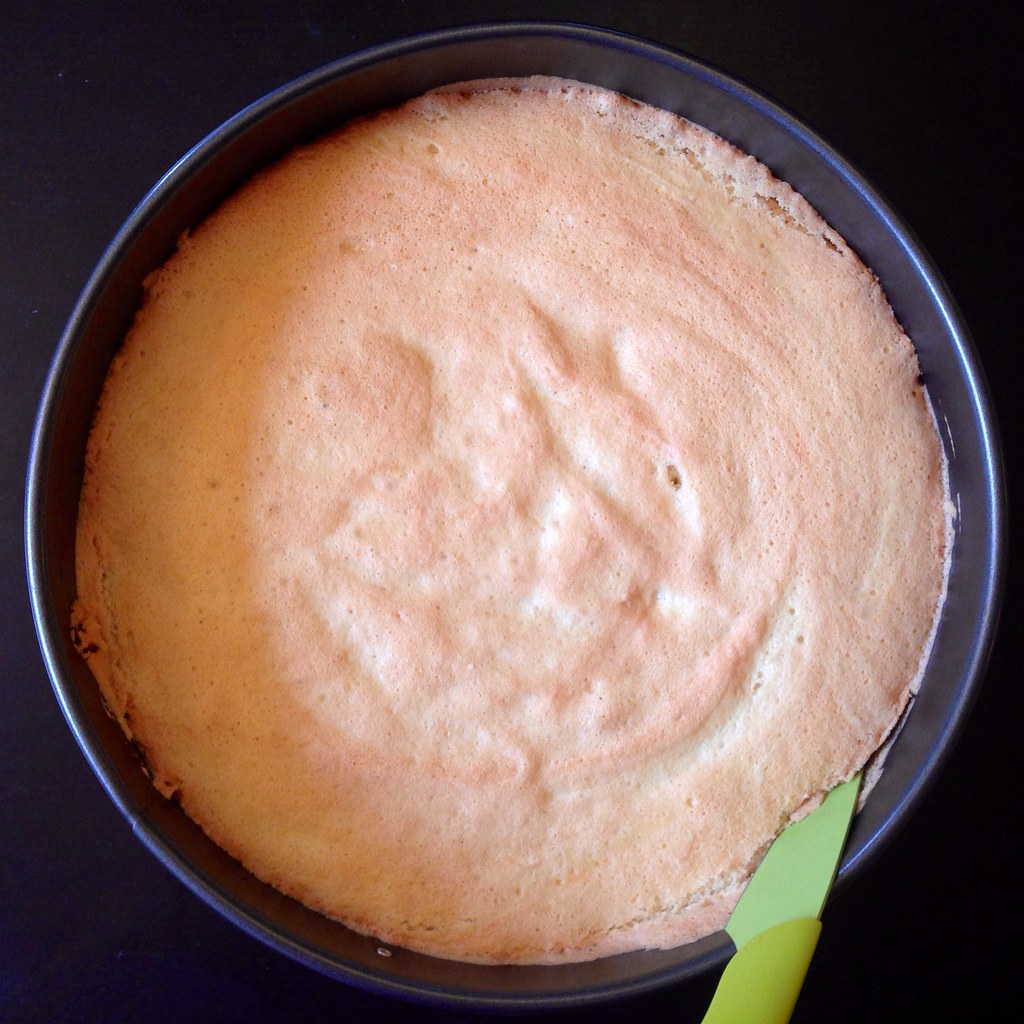 Allow the cakes to cool in their pans on a cooling rack for at least an hour. When completely cool, run a knife around the sides to release the cakes, cover each pan with a wax paper-lined plate, and flip. Gently lift the pans off of the cakes.

Carefully slice the cakes in half with a bread knife so you have four layers (or two, depending on how many cakes you made). Place each layer on a wax paper-lined baking sheet or plate.

Whip the cream and sugar together until stiff, making sure not to overwhip (or else you'll be making butter!). 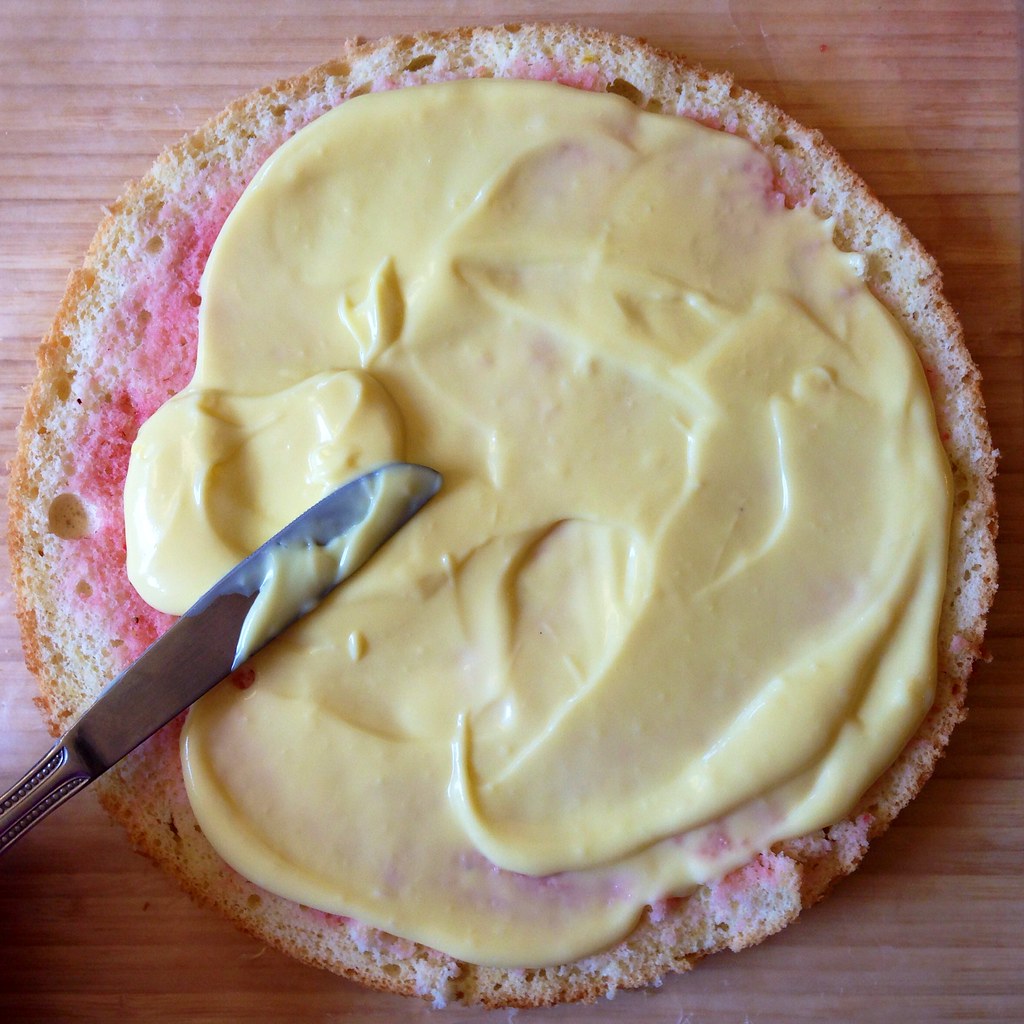 Place one cake layer on a wax paper-lined baking sheet. Brush with the reserved strawberry juice. Cover with a layer of custard, and then a layer of strawberries. 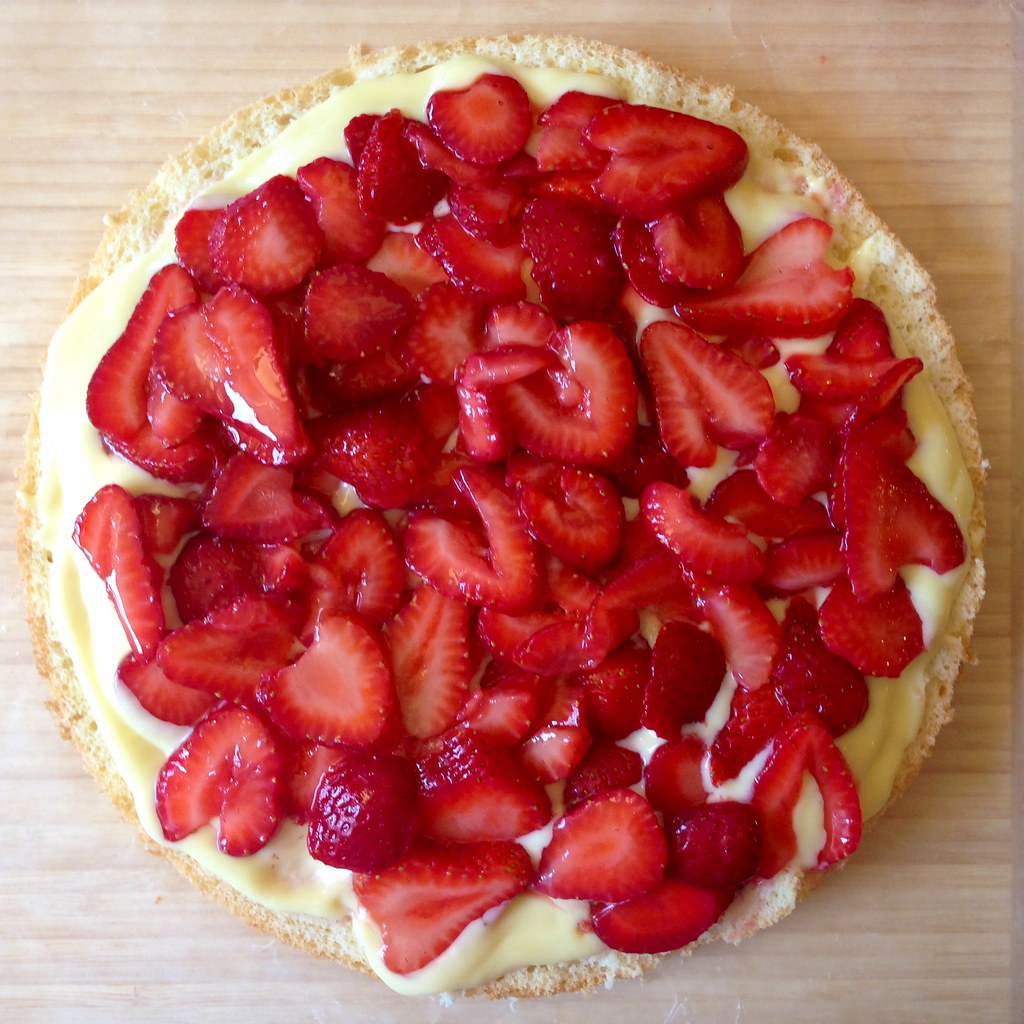 Repeat for the following layers if you are making more than a two-layer cake. 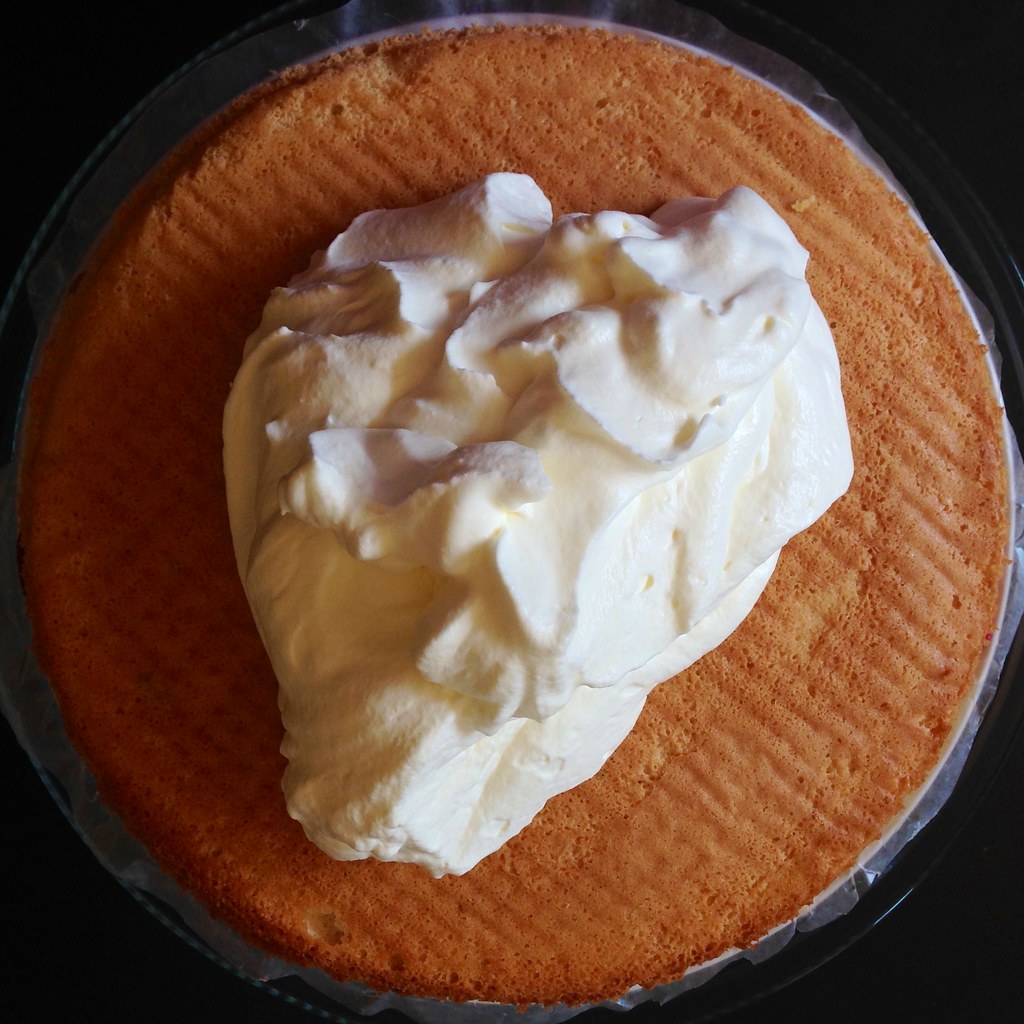 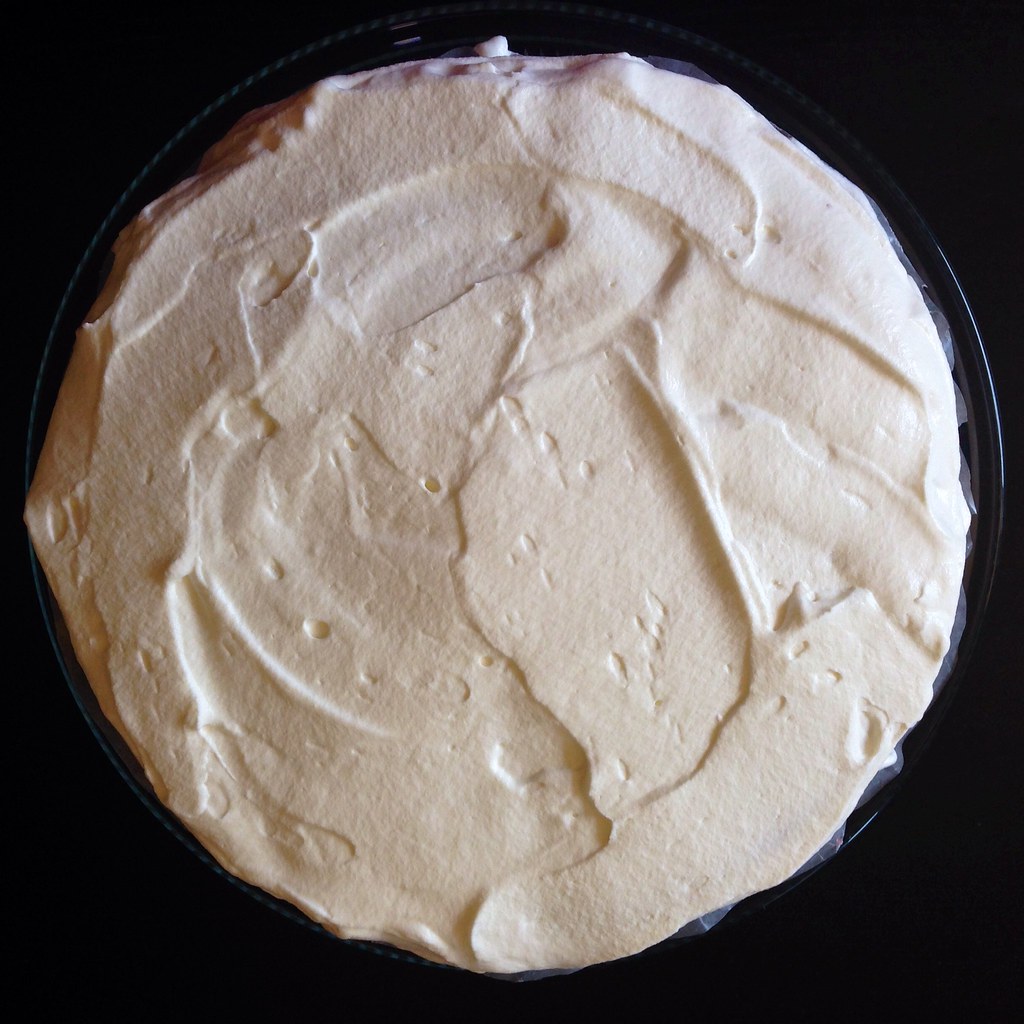 To make the cakes in a jar, bake the batter in two lightly oiled parchment paper-lined 9"x13" cake pans.  Once the cakes are cooled, use the lid of the jar as a template to cut out 10 (I was able to get 11, but 10 is a nicer, round number) circles, making sure to cut slightly inside the outline so that the cake will fit inside the jar. 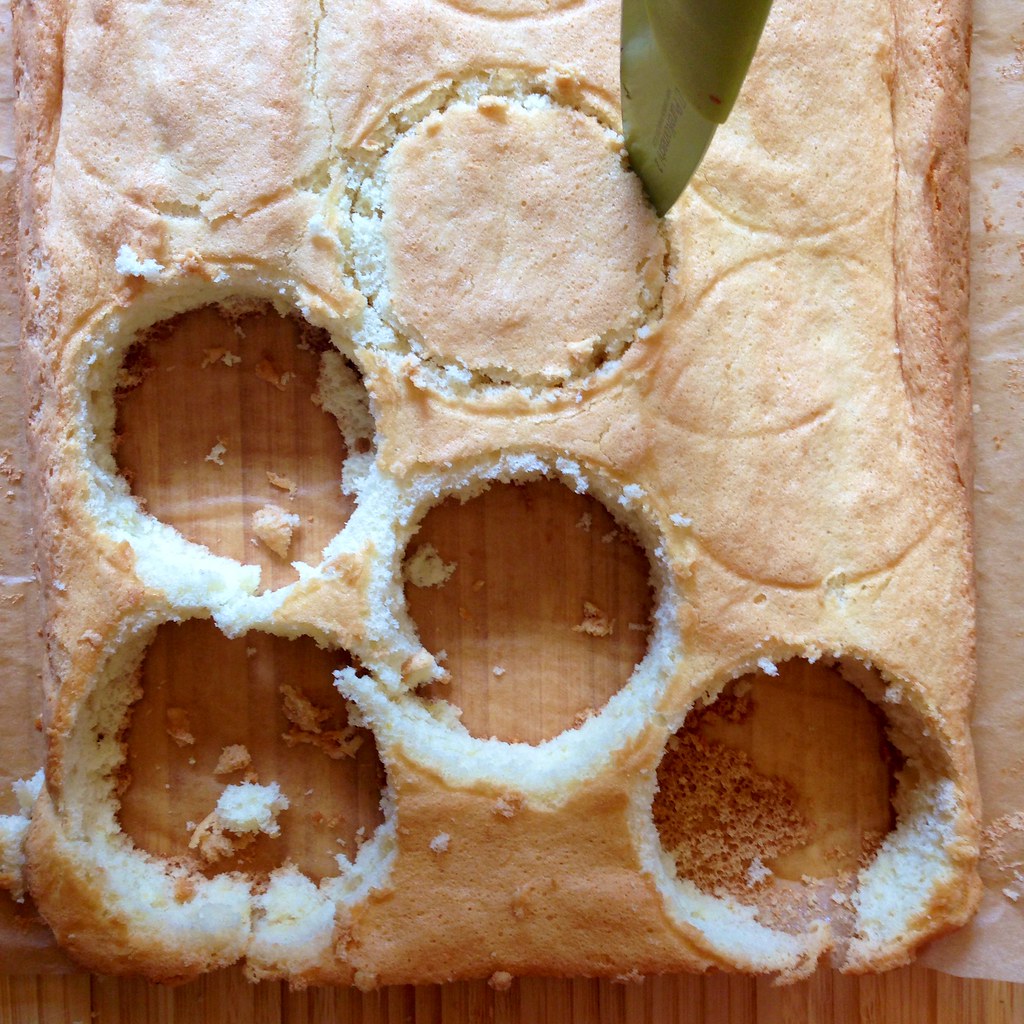 Tear the remaining cake scraps into large crumbs (you will use this for the middle layer of each jar). 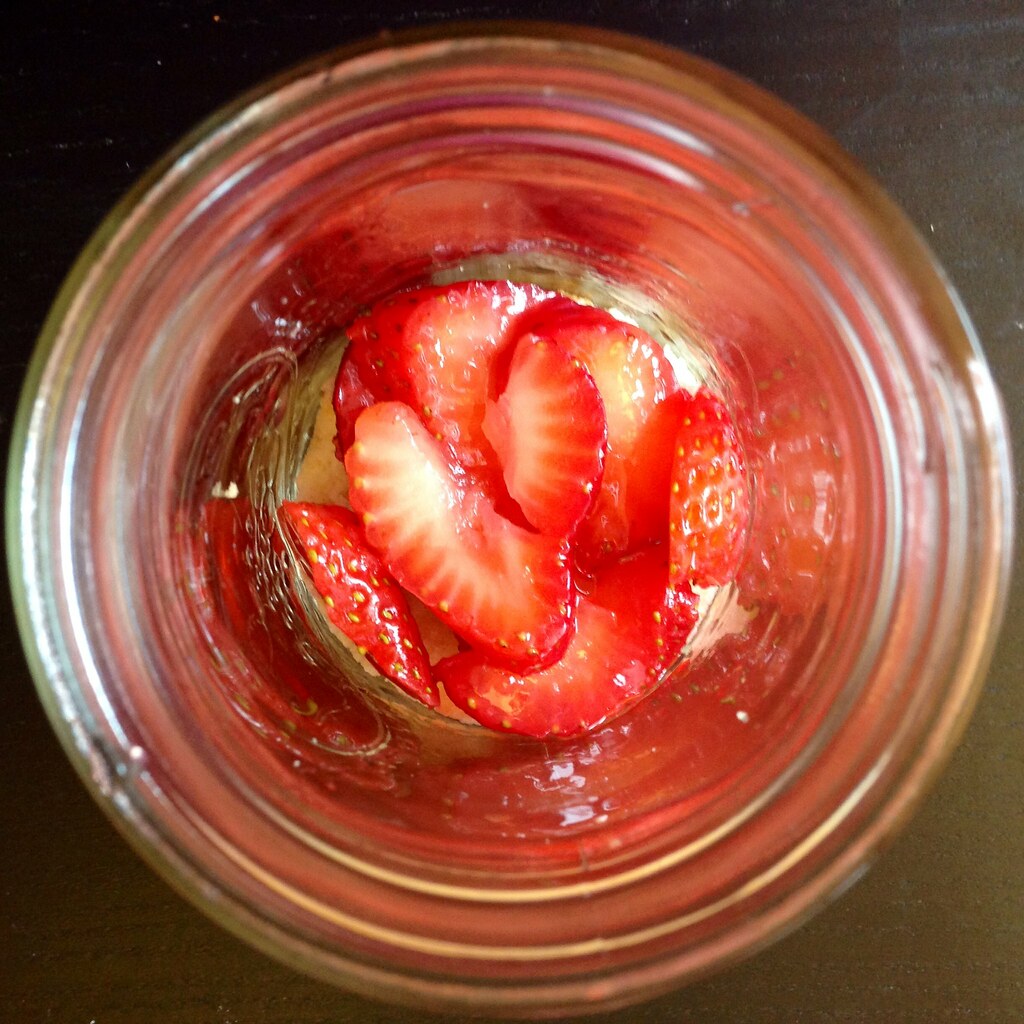 Slice each cake circle in half.  Place the bottom half in the bottom of a jar.  Top with a spoonful of the sliced strawberries (including some juices) and then a spoonful of custard.  Tap the jar a few times to make sure everything is settled.  Top with a layer of the cake crumbs and then another layer of the strawberries and custard.  Place the top half of the cake circle on top of the second layer of custard and top it all off with a dollop of whipped cream. 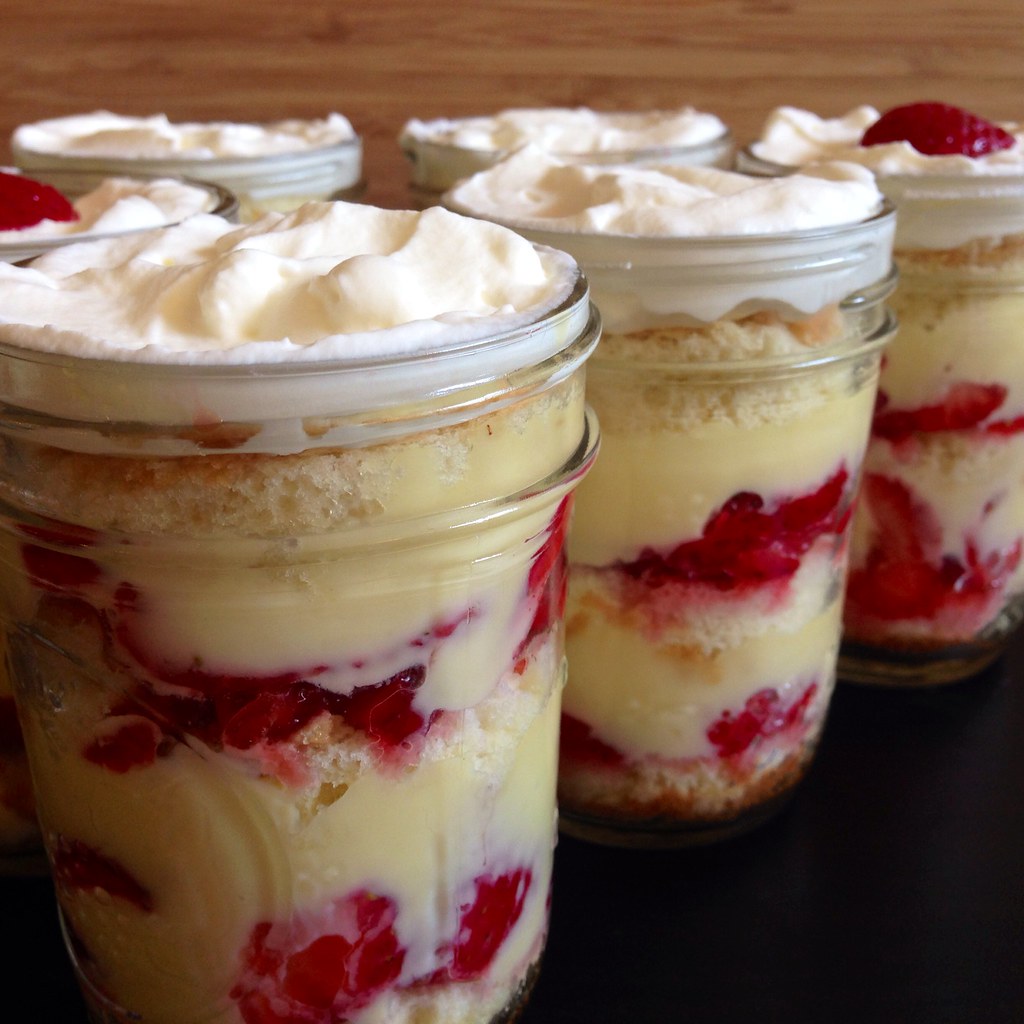 I'm not going to lie, making this cake is definitely a labor of love, but well worth it.  When I was finally done and took my first bite, I tasted exactly like childhood. ^_^ 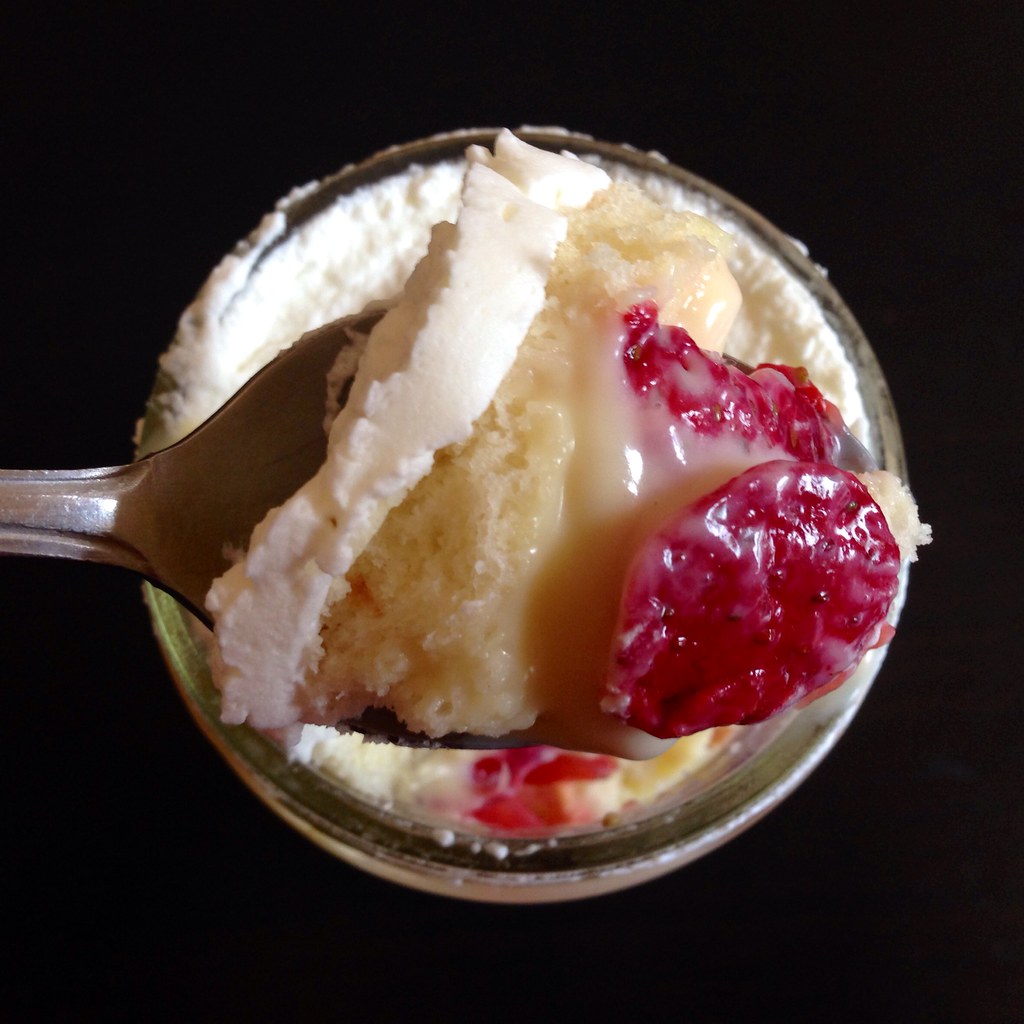