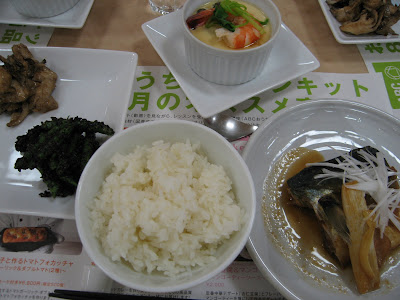 If you've been following this blog, you'll know I've been going to Japanese cooking classes at ABC, and might be wondering where the photos are.

I wasn't going to put them up, since they are taken on the hoof under less than optimal lighting, but in the spirit of sharing, I've decided to post them anyway.

For this autumnal class, we learned how to make buri (yellowtail) simmered in in miso, chawan-mushi (steamed savory custard), and vegetables in 2 kinds of sesame dressing (goma-ae).

The buri was a little bit of work, so I had great expectations. It certainly tasted great, but not that much better than tinned fish in miso sauce (which can be had very cheaply in Japan). Not sure that I'll be making that one again... 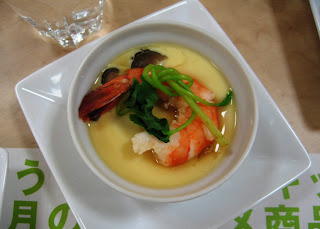 Chawan-mushi has a reputation for being difficult and not setting properly, it's one of those things people can easily get into a tizz-wazz about--a bit like risotto making. But this version was no bother and looked very impressive on the plate. I'll be making this again, but would dearly love to know what they do with the chawan-mushi at my favourite watering hole. It's really the best! 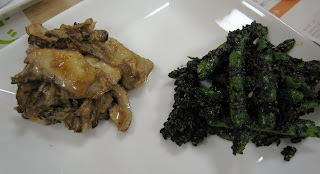 The goma-ae was a bit of a revelation for me in that I've never had it with anything other than spinach! ABC presented 2 versions, one with white sesame seeds, sesame paste, soy and sugar, the other with black sesame seeds, dashi broth, soy and sugar (sugar is a constant in Japanese cuisine, even in savoury dishes). These dressings adorned maitake mushrooms and still-crisp boiled green beans, respectively. Both were yum and both keepers in my book! Saffron