Cooking From The Blogs-What I Made

I made two recipes that I was able to take photos of this week.  Both were definitely keepers and will be made often. 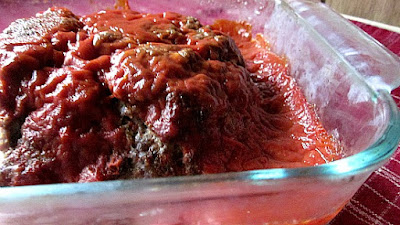 This first was Old Fashioned Meatloaf from Wives with Knives.  This was very, very good and may just be my new basic meatloaf recipe.  I followed the suggestion for reducing the milk to 1/2 cup.  When I serve mashed potatoes with meatloaf, we like a can of condensed tomato soup poured over the meatloaf halfway through the baking time.  This makes a nice tomato gravy and is something that my mother did when I was a kid.  I did not use the topping in the recipe.

I actually made this recipe twice.  The second time I added Italian seasonings, 1 cup of shredded mozzarella cheese, and topped the meatloaf with some leftover pizza sauce I had on hand.  It was very good that way, too.

Both meatloaves sliced wonderfully so would be great for sandwiches.  I loved this as some meatloaves I have tried have fallen apart when they were sliced.

This Amish Cheeseburger Soup recipe from The Better Baker came through in my email last week, and it sounded so good that I made it for lunch the very same day.  I added some chopped red pepper which I used in almost everything I can get away with.  I couldn’t bring myself to use a full pound of Velveeta  so I only used half a pound.  I thought the soup had enough of a cheesy flavor, but certainly the full pound could be used.  I also did as Marsha did and served the sour cream at the table for each person to put in their soup or not.  I added the sour cream, but hubby did not.  This recipe makes a gob of soup so we were able to eat it over several days which is always a plus with me.  There was even enough to take some to a friend at work.

As I said, both are keeper recipes that I will make often.  Thanks, Cathy and Marsha for sharing two wonderful recipes that you found on the blogs.