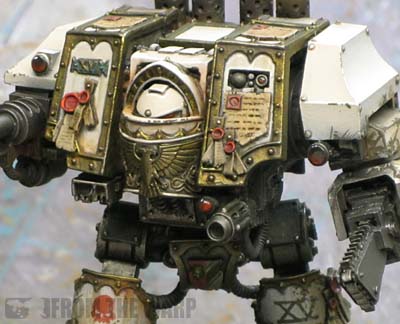 I've been working on this Deathwing Venerable Dreadnought for a little while now as I try and steal a little bit of hobby time here and there. He goes with the five-man Deathwing squad I did last year.

He's not "legal" in the sense that these options can be fielded in a regular game of 40k, but he's built to look cool and look like he's outfitted for Space Hulk work. If a chainfist and heavy flamer are good, then a bigger chanfist and a bigger heavy flamer are better. There's 40k logic for you. 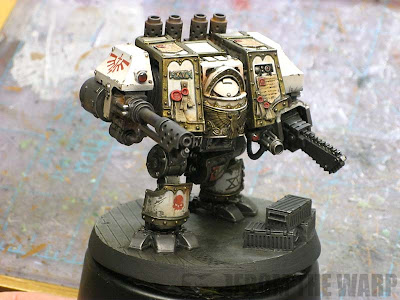 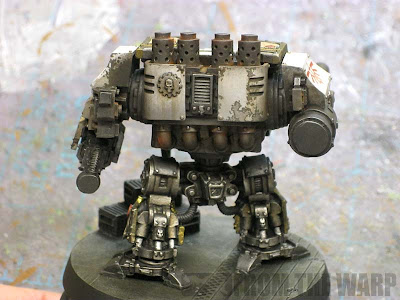 He's painted using the same blending technique I used on the squad. Light grey prime, blend of light grey and GW Dheneb Stone for the armour plates. The rest is weathering over various types of metal on the model. I did use the heat stained barrel technique on the Inferno cannon. The base comes from the same line the squad is is on (Flight Deck series). They come from Secret Weapon Minis. I used the same wash/drybrush technique as well so everything matches. 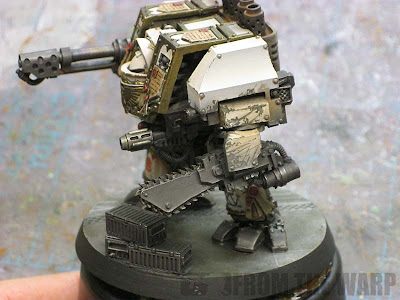 When it came to markings, I tried to stay close to what I could find in the Imperial Armour books as far as markings. Given that this guy is venerable and is already covered in purity seals and scrolls, I didn't have much free space left. The chapter symbol went on the right shoulder, a campaign badge on the lower right leg and his number on his lower left leg. The number is also repeated on the small brass plate on his right torso. Using brass etch made that little addition a breeze.

I do have to let him sit for a day and give my eyes a rest. I'll come back to him and work on some small details here and there and then he'll be completely done.
Here's a link to the huge WIP post I compiled.

Make sure to check out these posts as they might help:
How to paint Deathwing this crazy way
Weathering with metallic powder