Today's project was initially dreamt up the moment I spotted some sweet little planters from Urban Outfitters.  I fell in love with their gold versatility and at around $8-$10 each, I didn't think the price was all that bad.  But I thought, "Hmmmm, could I just make them for less?"  I can certainly try! 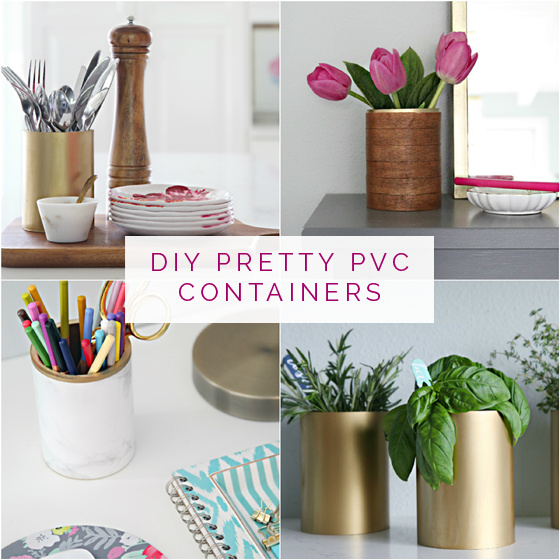 It looks like my inspiration has since been sold out, but here is a glimpse of the one that I had heart eyes for. 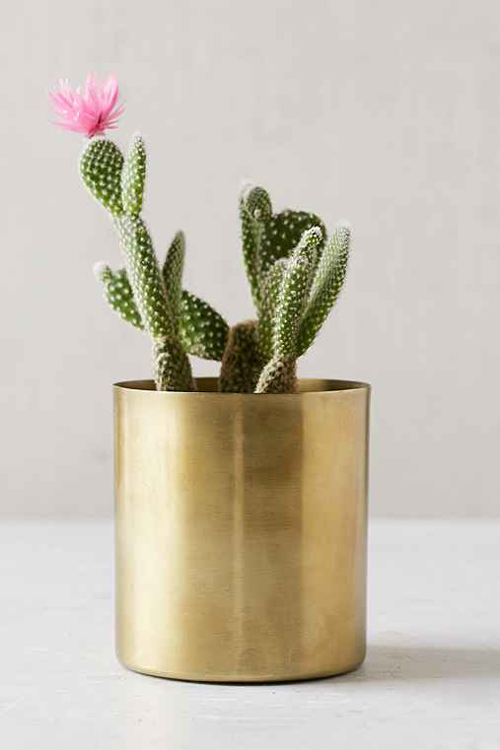 (via)
My plan was to make three herb planters for our kitchen, so I went through a variety of DIY solutions in my mind continuously came back to PVC.  PVC is both easy to work with and not too expensive at most home improvement stores.

To get started, I purchased one 3" wide x 2' long PVC tube for around $7.50.  I also purchased a few cans of corn and dug out my gold spray paint and Rub-n-Buff. 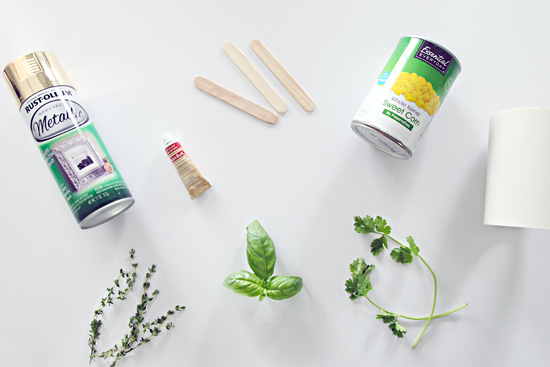 Going in, I didn't think that I would be able to create a sleek waterproof option, so the cans of corn were purchased to act as an insert for holding soil or water, the PVC was to be more of a decorative sleeve.

The process was simple, we cut down the two feet of PVC into multiple cylinders, slightly taller than the can of corn (we were able to get 5 total cylinders from the single $7.50 tube).  PVC can easily be cut with most saws and lightly sanded to smooth any rough edges.

I then gave each PVC cylinder a few coats of Rustoleum Gold Metallic Spray Paint. 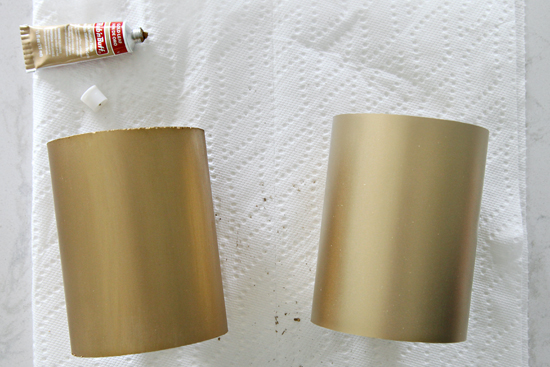 The cylinder on the right shows a nicely sanded cut edge, the one on the left shows the edge I initially missed which was easy enough to go back and fix even after painting.  The one on the left also shows the difference a little gold Rub-n-Buff made to the finish.  It gave it a little bit of that patina that is in the original inspiration piece; you can rub it in a straight or circular motion to achieve the look you are after.

And it was simple as that.  I planted a few herbs into my washed out corn cans, and slide the PVC over the top and instantly had myself some little gold planters. 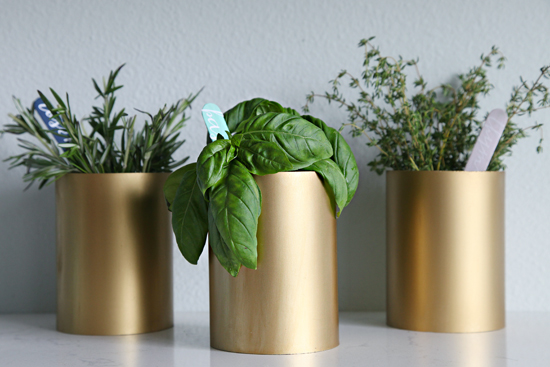 But then I realized that they couldn't be easily moved without the can falling out of the bottom, which is not really an ideal situation, especially for items that need frequent watering.  So, I went back to the drawing board and also back to the home improvement store to find some 3" PVC caps (which I also sprayed).  Luckily, we cut the tubes long enough that the added height of the cap didn't push out the tin can, but it is something to consider when measuring for your cuts. 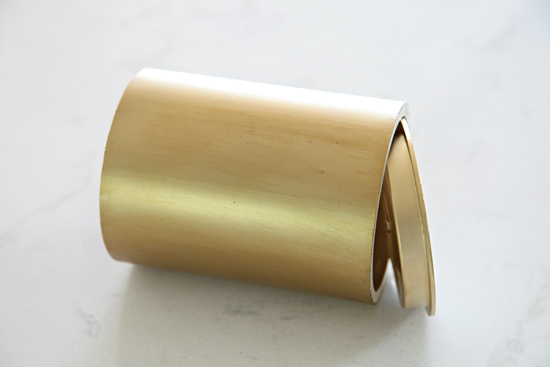 For the herb labels I had Parker paint me some thick popsicle sticks with craft paint and I added some vinyl labels with my Silhouette.  Cute right? 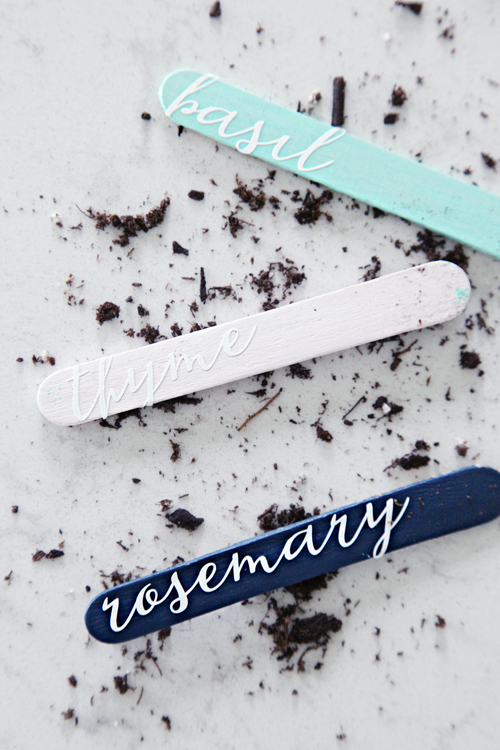 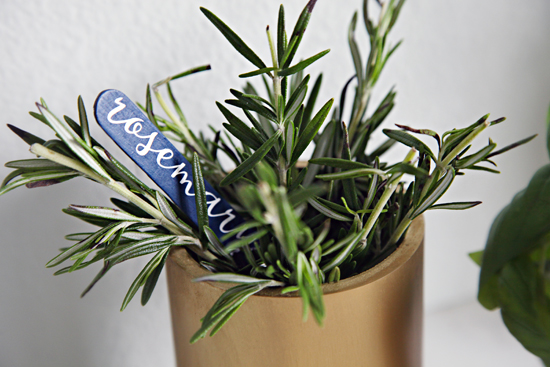 Buuuuut.... I ultimately decided that our kitchen doesn't really need three gold planters.  They were pretty, but our kitchen ultimately needs something with more character and color.  They gold was just "too much" anywhere they landed as a grouping of three.

However, I was loving the idea and didn't want to waste the project, so I just kept playing. 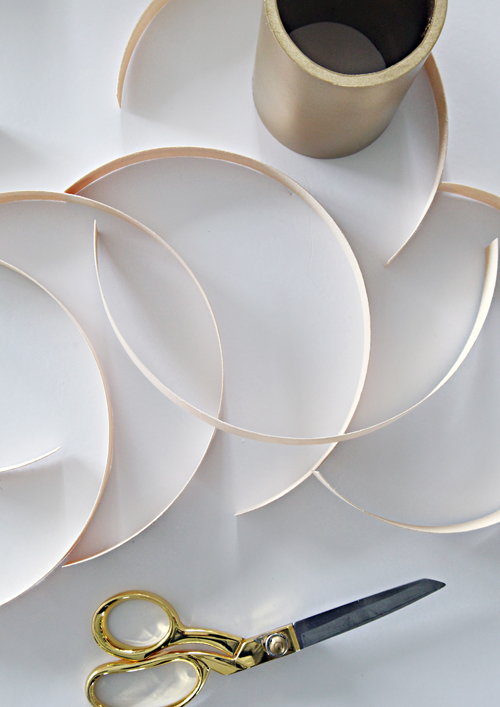 Round two I was going to make a wood vase.  We have played with wood veneer edging in the past, so I thought I would see how it would work wrapped around the PVC tubing.  Using scissors, I cut multiple strips just long enough to fully wrap the tube. 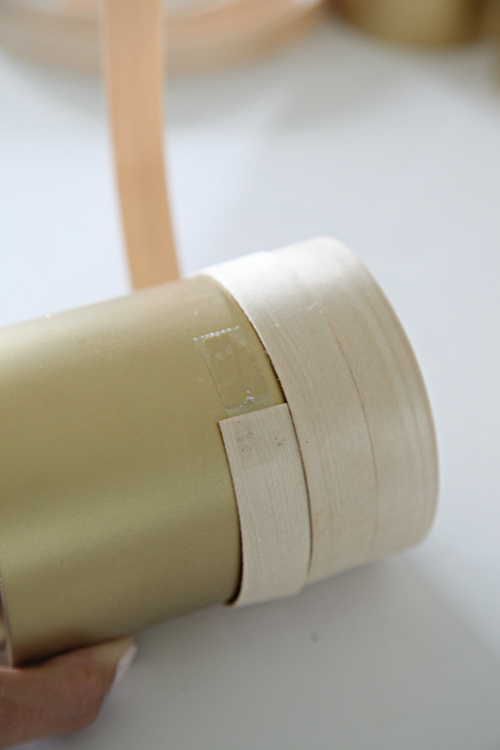 Hot glue alone didn't want to hold the strips, I found it stronger and better to start with a piece of tape (I used double sided) and hot glue.  Once the starting point was secure, I continued to hot glue and pull the strips tightly around the PVC. 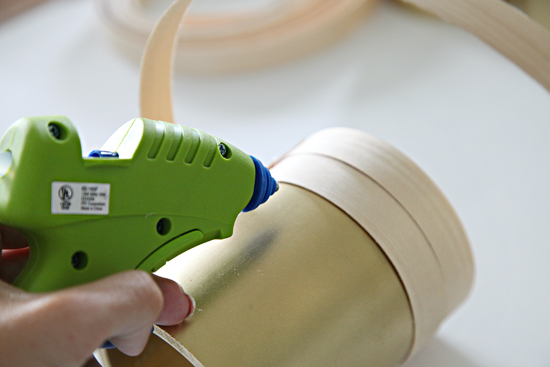 If you find one doesn't lay the way you like, it is easy enough to pull it back up and try again, even a few strips in. 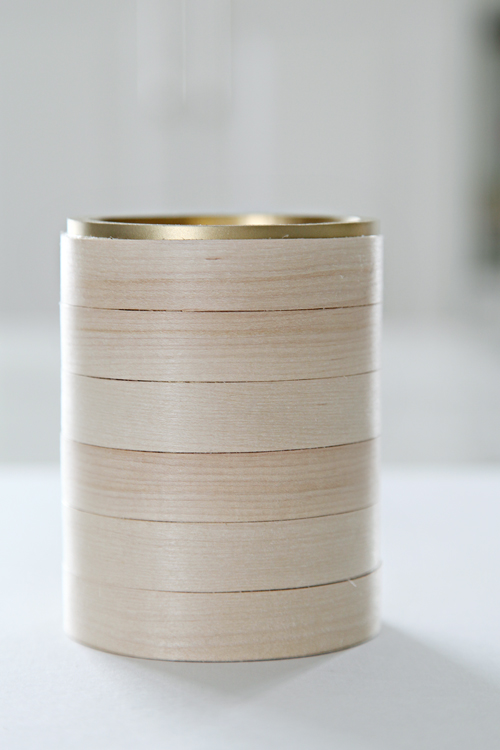 Once the strips were secure, I grabbed some stain and rubbed it onto the vase with a paper towel (Varathane's Early American). 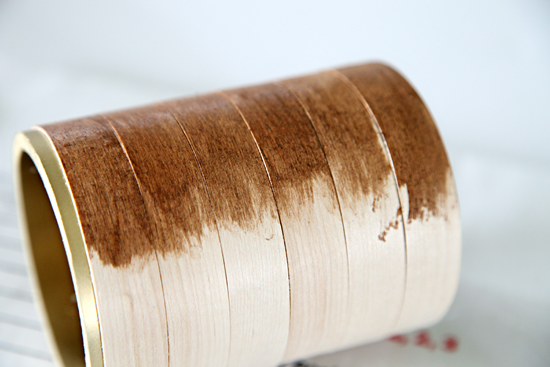 After it was dry, I filled an empty tin can with water and placed it inside of the tube.  I then filled it with some fresh flowers and fell in love with the warm result.  I also loved the little bit of gold still popping through on the top. 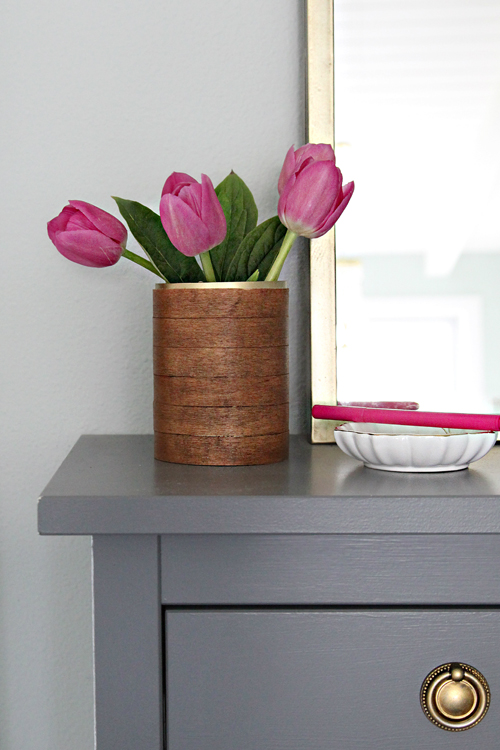 The last tube was wrapped with some beautiful marble contact paper (still leftover from this project), to create a lovely and substantial looking pencil cup. 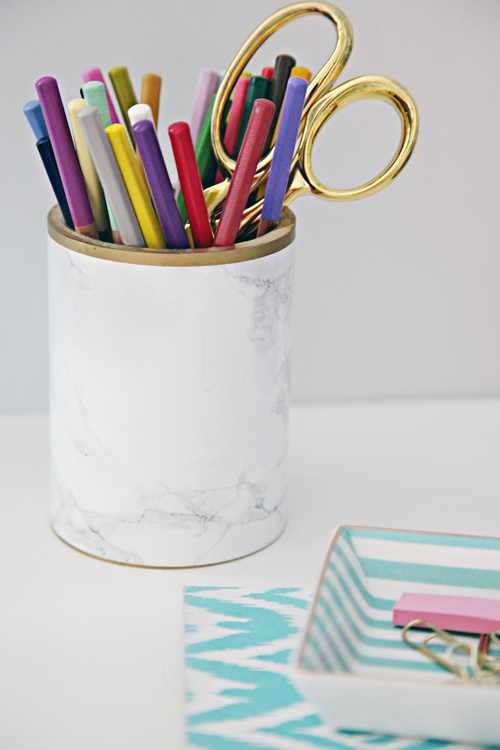 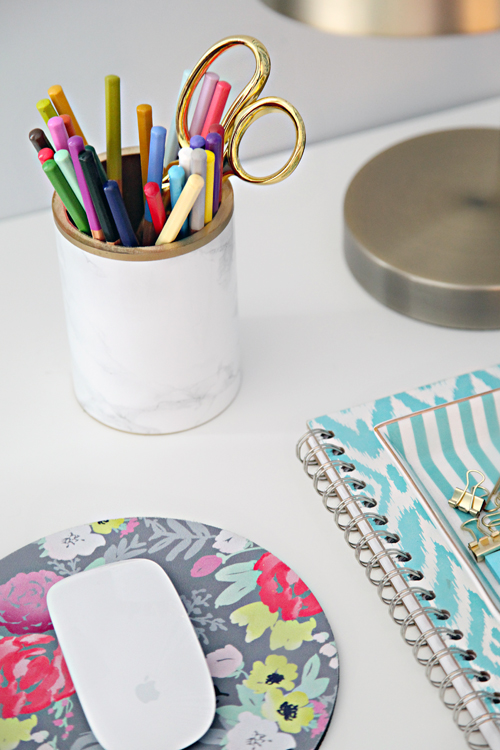 Once the bottom was added to the tubes they became endlessly versatile, especially with a can added as a liner for planting and water.  Most nights at dinner we keep things informal and I place all of the cutlery into a mason jar on the center of the table.  Now, I can toss them into the gold or marble "vase" to bring things up a notch. 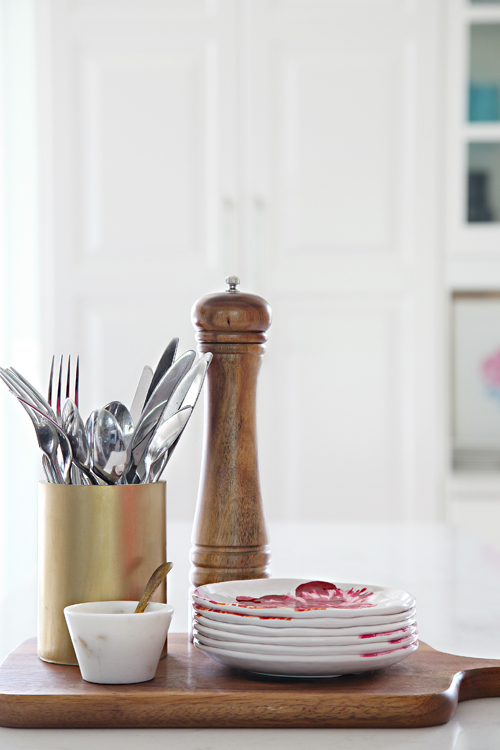 Funny how one idea spun into a whole lot of randomness and the initial intention didn't even stick.  But that is why I love a little DIY crafting session, it allows the creativity to flow and you never know where you will end up.  And who knew that PVC and pretty could ever go together?

These little cups will be useful for so many fun things around the house.  Vases, planters, containers, drawer organizers, oh my!  Only time will tell where else they will land down the road.