When I was a wee lad, spaghetti was a common dinner but was always made with a chunky meat sauce that came from the printed recipe on a Ronco pasta package. My first exposure to actual meatballs came at one of the Grisanti family restaurants, and bore very little resemblance to the rubbery chunks packed in cans of SpaghettiOs®. Later on, I'd obviously learn the joys of meatball subs and some traditional Italian-American preparations that were the size of a fist and would rest in your stomach like a lead cannonball. 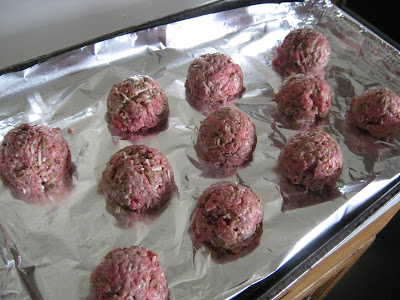 I recently got a craving for this American classic, and found the ingredients close at hand. A pound of ground meat (beef, pork, venison, lamb, goat, or any combination thereof), one egg, a quarter cup of bread crumbs or cereal or something starchy, a dash of milk, some shredded Parmesan cheese, a dash of Worcestershire, and some oregano/thyme/whatever seasoning you're in the mood for. Mix all that up in a bowl and then scoop out quarter cup mounds on a cookie sheet. Bake at 180°C/350°F for 20 minutes, or broil for 10 minutes. Just get them browned on the outside but not dried out. 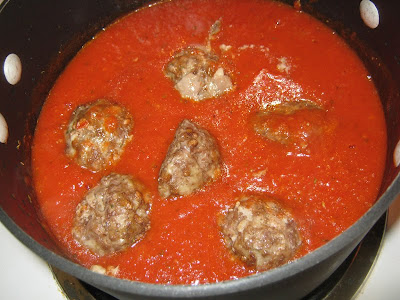 In the meantime, prepare a pot of tomato sauce. Use the jars if you want, or do it from scratch, or combine a jarred sauce with cans of diced tomatoes and other goodies. Splash in wine and other tasty things. Add in the meatballs and allow to cook just below a simmer for three or more hours. I left them exposed for the photo, but go ahead and submerge all the meatballs in the sauce and put a lid on the pot. Don't let it boil or get too hot--you don't want the roiling liquid to rip apart your meatballs. A gentle heat just under the simmering level will provide the perfect savory braising environment. 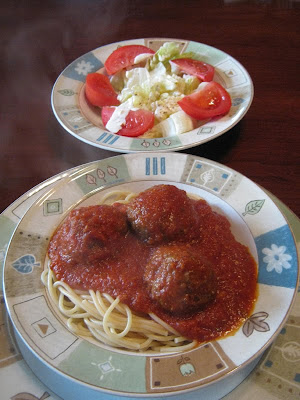 These can be served in many ways, but I say go for the classic: a nice plate of spaghetti. Spoon some of the sauce over the noodles first, then ladle in as many meatballs as you can handle. Three was plenty for me, and I'm looking forward to the leftovers. Since I was already in a goofy 1950s mood, I made a salad out of chopped iceberg lettuce, tomatoes, and bleu cheese dressing. Frankly, I found myself really wanting a red check tablecloth and some Dean Martin music. At the very least, a particular Billy Joel song would have been perfect.

Now, if it's late at night and you find yourself craving that simple BBQ sauce they serve with meatballs at wedding receptions, just mix equal parts ketchup and grape jelly, heat it up in the microwave, and try not to burn yourself while sneaking around the kitchen. For a fun variation, use equal parts ketchup, apricot jelly, and Dijon mustard. It's got a much better flavor and if you've got a properly stocked refrigerator, it should be easy. Heat up your sweet little sauce, warm up a pair of meatballs, and enjoy that late night episode of M*A*S*H and reminisce about hanging out with your dad and eating sausage and biscuits during reruns in the 80s.