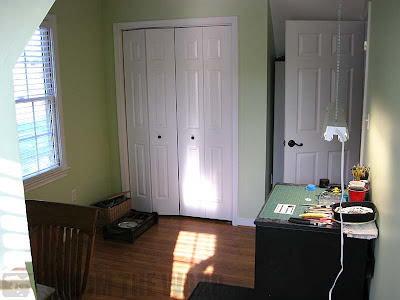 That's right, the FTW studio has finally been put back together. While it's not much to look at, it's a step up from what I had before. There's still a ways to go with lots of things, but I'm finally back to the point where I can start modeling and painting again. It feels like it's been forever.

Let me back up first and say THANK YOU to everyone for all your support through this huge undertaking. Even going as smooth as it has, I wouldn't wish this experience on my worst enemy. Everything has helped from the emails to the comments to the contest entries. Every little bit, no matter the size has made a difference.

As far as actual hobby stuff that was lost, I don't think I came out too bad. One of my good paintbrushes, a set of Forge World Deathwing shoulderpads (I have no earthly idea where they went) and half of a DKOK squad conversion I was right in the middle of working on. I think I have most of the bits to the squad, it's the smaller things like backpacks that I was making when the storm hit. I'm fairly sure I need to make a bunch more of them and some new body armour plates as well.

Most of my paints made it through. I had a couple pop open and leak out over the past month because of being stored, moved, tossed around and such. Other than the mess, they made it out in decent shape. I may have to pick up some new tools (file, drill, etc.) since the old ones were subject to the crazy humidity here from being in storage. I'm sure there are other things I don't know about right now, but I figure I'll discover them as I go looking later on when I need them for a project. 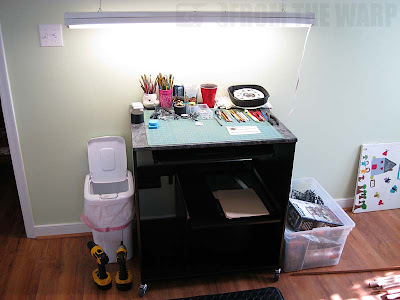 So what's new with the studio?
As with all things in married life, it's a give and take. You give and the Wife takes. No, no, no... I kid about that. Right now I'm sporting the old computer desk that was cleaned off after the storm. My original "desk" did not fair so well since it was really just a cheap shelf unit that I was using propped up on a crate. My Wife says the computer desk is temporary until she can find me a nice desk that looks the way she wants it to. I suspect it will be an antique of some sort because she likes them.

She assures me I will be getting a new desk and a chair. I just need to be patient until that time comes. Besides I can use the computer desk chair until then. 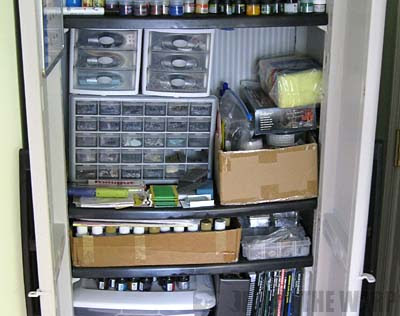 The room is a bit more uncluttered since ALL of my hobby stuff has been moved into a portable shelving unit behind the door to the room. This is good since it has forced me to get rid of a lot of older junk and go through everything. I need to work on being more organized as it is anyway.

I'm hoping the organization carries over to my desk as well. I need to get better about keeping it clean and organized while I work on projects.

And the rest of the house, what about it?
The rest of the house has been put back the way it was before the storm. Almost. We still have lots of cleaning to do with all of the drywall dust that settled on everything throughout the house while work was being done. We work on small sections each weekend and will eventually chip away at the remaining areas to be cleaned.

There are still some smaller things that need to be built like some shelves and such, but the big stuff is all done now.

After sitting down with the Wife and asking what she wanted when it came to the new washer and dryer, she asked me if we could fix some smaller things instead of buying a whole new set right now. How could I tell her no? She asked if I would take care of some smaller projects that she's always wanted to have done first. It looks like I should be able to do a few commission projects and have enough to get her a new washer after that.

A friend of mine who lives nearby gave me his old dryer. With a little bit of cleanup and a new wire plug, it should replace the one we have now. It squeaks more and more every time we turn it on. It just needs to make it a bit longer.

What about the contest?
The contest is quickly coming to a close at the end of this month. I'd love to see everyone have the chance at winning a new model. The turnout has been great so far and I have to tell you I am super excited about building/converting/painting this model. It's going to be the first real thing I do with my new work area. If you still want to get in on the contest, here's all of the information you need.

A huge Thank you to the readers and supporters of FTW!
And I want to say it again, THANK YOU everyone! Your thoughts, prayers, emails, comments and support have made all the difference in the world.

I'll be posting my first actual bit of new hobby content this coming Monday. I had a reader ask me about adding some contrast to his swords without getting into the whole NMM approach. It's easy enough to do and adds a nice effect to your metallic weapons.

Make sure to check out these posts as they might help:
FTW studio destroyed by severe warp storm
The studio is being cleaned up slowly