The stacks of spring catalogs and websites beckon, and I seek a beacon amid the sea of stripes and flowers, chiffon and canvas.
When faced with such bounty, I ask, What Would Jane Do? It is the Jane of today who inspires me, not the reedy muse of the '60s. The Birkin attitude, relaxed and unfussy, provides ballast against too much: too much embellishment, too much detail, too much much.
What Would Jane Do? 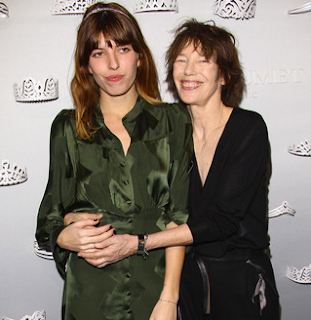 Mere et fille1. Jane would never over-coif.
Her hair is always loose, touchable and not tarted up highlights that look like bad wallpaper.
2. Jane would apply a consistent point of view, and not dither, flou one day, Japanesey the next.
Birkin dresses as if she came from browsing in a bookstore. Her clothes look functional, comfortable and uncontrived. She skews to under-dressed, but notice that the belt on the photo is faced in pink leather. She knows that the wink delivers more than the shout.
3. Jane would not worry that a garment shows the aging bits.
There are evident signs of life on her 65-year-old neck: 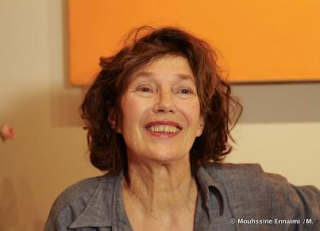 Open collar, open face
and arms, which many women are terrified of exposing unless corded with muscle. But yes, Jane shows, and she smiles. 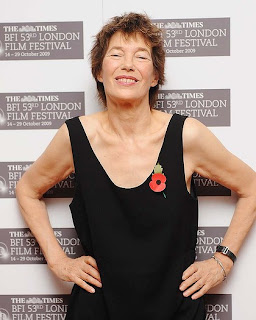 She shows her arms...
In fact, joy seems easily summoned, with its creases and exclamation marks: 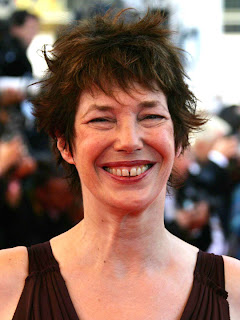 ...a gap-toothed smile
And character shows in her face, along with her years: 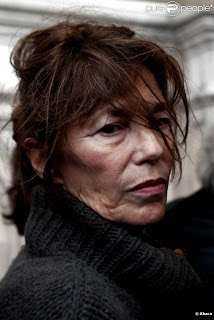 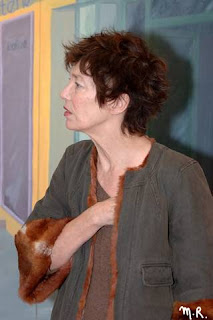 That's a grey suede jacket trimmed in mink, worn over a thin cashmere tee. She wore this jacket (by Hermès) often in the last year, usually with jeans.

She adores that jacket, you can just tell. Why not wear it again and again?

In fact, it is difficult to date some photos of Birkin, because she repeats key items (cashmere tanks and tees, loose wool shirts; chunky knit jackets) or has nearly-identical versions. 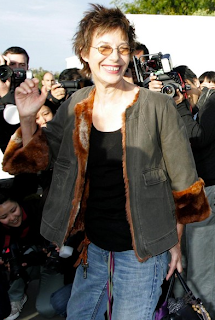 4. Jane would wear black, not worrying that her St. Laurent le smoking is not this-very-instant trendy. Jane does not overthink or "tweak a classic", a phrase I've come to dread, as it usually results in messing with an impeccable design.
She would stand next to one of her talented daughters, Lou Doillon, and be proud. 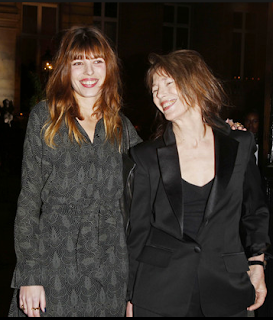 Jane et Lou
A long sequined tank under a cardi; a shoe she can move in:

Birkin in black
6. Jane would wear colour, applied in unexpected combinations. She does not choose brights at her face.

At Hermès 2012 Fall Ready-to-Wear show in an aqua sweater over navy, with olive pants:

In the front row, bien sur!
On the red carpet in a caramel sweater that slips off the shoulder and a taxicab yellow skirt: 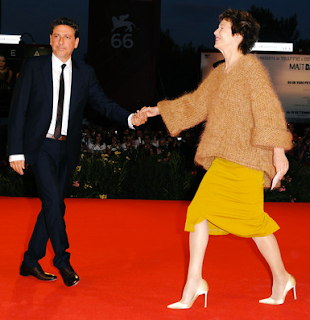 At the Venice Film Festival, 2011
A few tweaks
No one can be Jane but Jane, but anyone can borrow a few notions: pull on jeans, rake hands through hair, apply light makeup. Smile, wear your favourite things to tatters. Dress down when dressing up. But Jane pays attention; her style is gamine, not graceless. 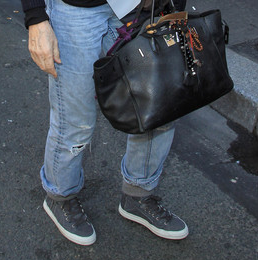 In Chucks
We differ in some ways: She wears little jewelery, maybe a thin bangle or chain with a small charm. She favours Converse Chuck Taylors, which make my feet sweat. Still, she is a model of a mature woman who looks entirely bien dan sa peau.
And her Birkin? I have zero; she has owned but four, serially, donating the first two to charity and auctioning the third last April on eBay to support Red Cross relief work in Japan. But the winner didn't get a pristine trophy for more than $160,000; the "beater Birkin" came with handles wound with worry beads, sides sporting stickers. 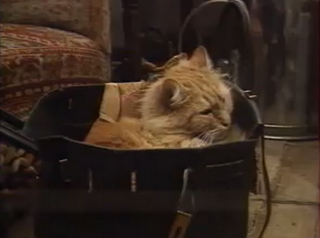 Jane's minou "There's no fun in a bag if it's not kicked around", she says, "so that it looks as if the cat’s been sitting on it—and it usually has. The cat may even be in it!"
(Photo of Jane's cat in her bag retrieved from the blog Christopher Niquet.)